They say you never really know a person until you live with them. When Winona and Riccardo decide to self-quarantine together at her luxury condo on Central Park West, each day brings a new revelation. A new truth. Some are sweet. Others not so much. It’s three weeks of mad discovery.

Covid-19 has taken over the planet! Riccardo suggests we shelter-in-place at my condo and I agree to it although my gut is in don’t-do-it mode. Jumpy jittery. Is it just me being me? I’ve lived with only one man in my life, many years ago when I was still modeling. I was in and out of the country a lot so it didn’t seem like a full-time situation. This time will be different. We’re on lockdown for at least three weeks, going out only if absolutely necessary. Can he and I survive 24-7 of togetherness? 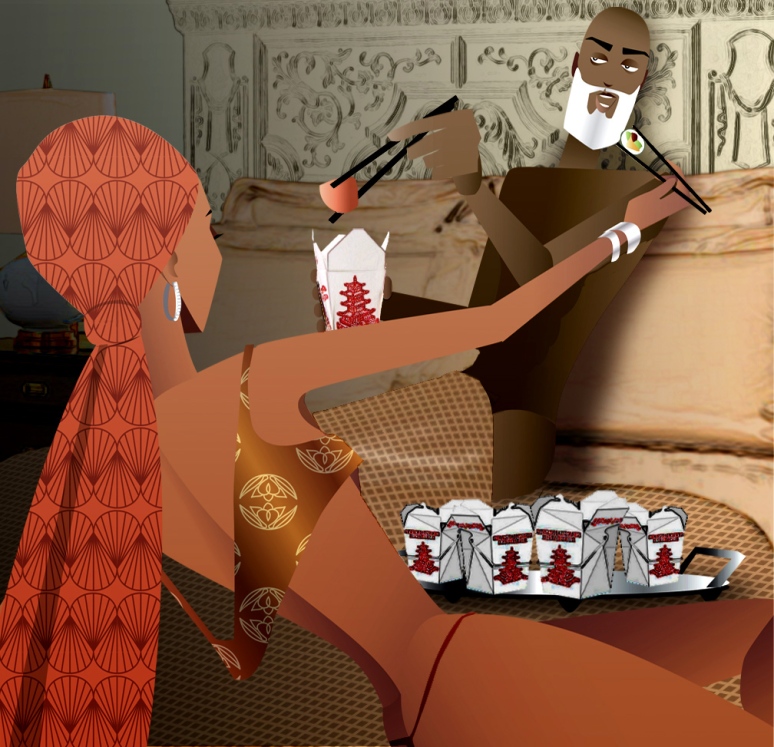 One thing’s for damn sure. When sheltering-in-place, it’s nice to have an in-house piece to lock it down with. We eat, knock boots, order more food, knock boots some more, sleep, wake up and go at it again. But we’ve got to climb out of this bed eventually. Right? Maybe tomorrow? What day is it anyway??

Riccardo is working on a new novel and my little salon-slash-media room has become his office. This man’s daily routine is whack! Lounging about in silk pajamas, he drinks tea, smokes weed and shouts at the tv while switching back and forth between CNN, MSNBC and the local news broadcasts at noon, six and eleven pm. He does manage to get some writing done, though. He’s old school, working out his story details in longhand, and there’s ledger paper all over my floor. It’s killing me.

I dress and put on a face every morning before sitting down at my desk. Or better yet, pacing back and forth across the floor while talking on the phone with retailers, fashion editors, casting agents. My broker. The agency is closed, my models aren’t working, and all business is at a standstill. I’m losing a small fortune every single day. Riccardo’s barbershop emporium on Malcolm X Blvd. is shut up tight. So are the three food trucks he has parked outside The Met on 5th Avenue. Life as we know it has ground to a halt.

Spreading out like a virus himself, Riccardo is occupying more and more of my space. Every day there’s another delivery. Clothes, gadgets, toiletries. My man comes with a lot of baggage. Literally. The frig is crammed with cartons of juice and jars and containers of I don’t know what. And the worse? Those white whiskers! They’re everywhere! I finally snap and not just about his beard hairs. I throw the media room mess into the mix, too. Things get testy. But then we discover a mutual love for J. R. Ewing. Who knew? Snuggling on the couch, we snack for three-and-a-half days while binge-watching DALLAS on Amazon Prime.

One afternoon, on my way to the kitchen, I hear him in the foyer talking to someone. It’s a young woman. She looks Latina behind the mask. He hands her several bills and she extracts a plastic baggie of weed. They see me and freeze. He introduces her as Ariana, his “weed guy”. She’s giving me the sneaky side-eye but it barely registers on my radar, which is turned all the way on him and set on blast. Really, bruh? Pandemic or not, how about a heads up before inviting strangers into my space? After all, it is my space.

After two and a half weeks inside, I’m just tired of the whole ordeal. It’s time to break out of here. I call for the town car to take me downtown to the agency. They assure me that the limo has been thoroughly disinfected, shields are up and in place, and my driver has a clean bill of health. Okay. Deciding on which mask to wear, I’ll confess that I’ve developed a thing about it. The mask must work with my outfit. Even just going downstairs for the mail. Silly? So what? It gives me something to do. But Riccardo is mocking me. He rolls his eyes and calls me the s-word. Shallow. 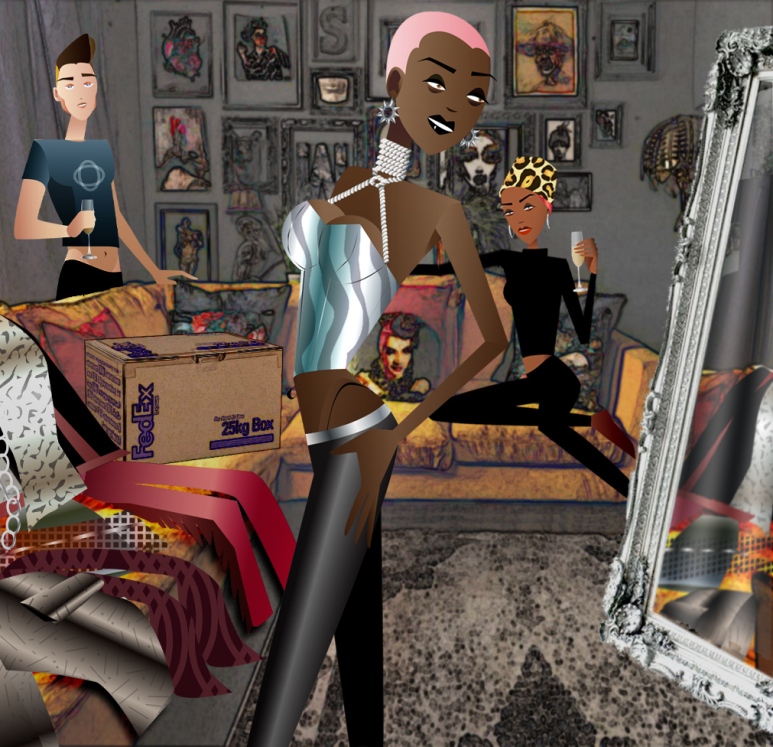 At WINONA, INC., in blissful silence, I do a wellness check on each of my twenty-seven models. They’re scattered all over the world, trapped in Spain, Italy, France, and it takes hours to reach them all. Afterwards I stretch my legs and walk twelve empty blocks to Lourdis’ place in the Village. She’s been holed up for two weeks with a hunky twenty-two year old. We drink champagne and practice our social distancing while she tries on a shipment of new fashions from her favorite boutique in London. “How’s things uptown with the writer?” she asks. Should I admit that it’s been somewhere between sheer nirvana and a bad dream, depending on the time of day? Nah. Instead I laugh. “It’s like living with Hugh Hefner. His pajama game is insane!”

It’s early evening when I return home. There’s a guy, real regular, standing outside the building. He’s one of those characters who’s made the willful decision not to wear a mask and Don the doorman is struggling to keep him at a distance. The stranger turns, sees me and extends his hand. “Hey girl”, he says. “I’m Tyrone.” I take a few steps back and he stops. “I just wanted to say hello,” he snarls. “Your man had me bring some of his things down here. You got a nice crib upstairs. You been living here long?” 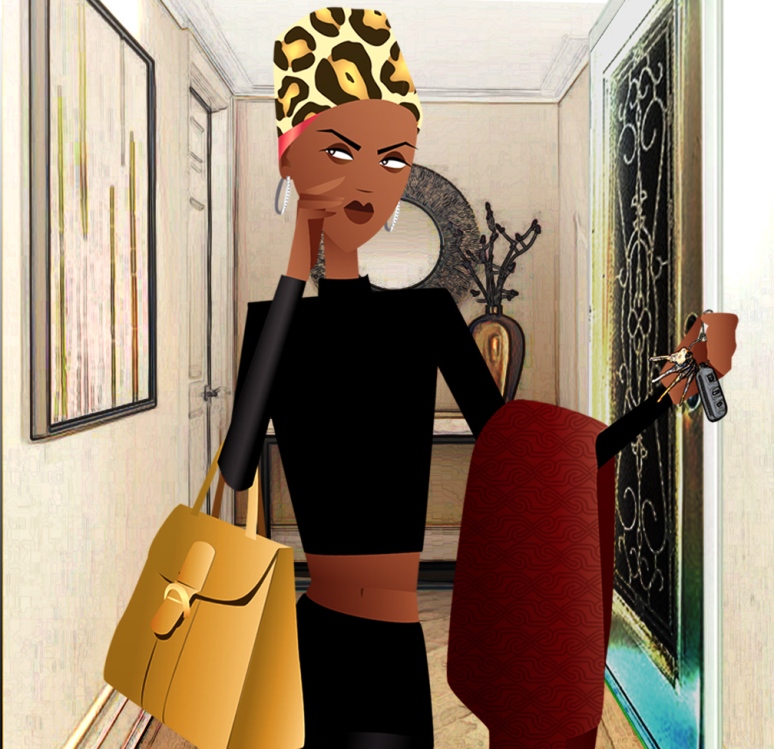 In the elevator, I’m reeling. He did it again?! He’s had someone else in my house? Just what part of don’t-invite-strangers-into-my-home doesn’t he get? No. Riccardo’s not stupid. He’s just acting like it, trying to impose his will on my territory. Pissing all over my boundaries? I’m the wrong one, boo.  And I can’t wait to tell him! The elevator door opens and I step into the vestibule. Hold up. What’s that odor? I put the key in the lock and open the front door. “What’s that I’m smelling in here?” 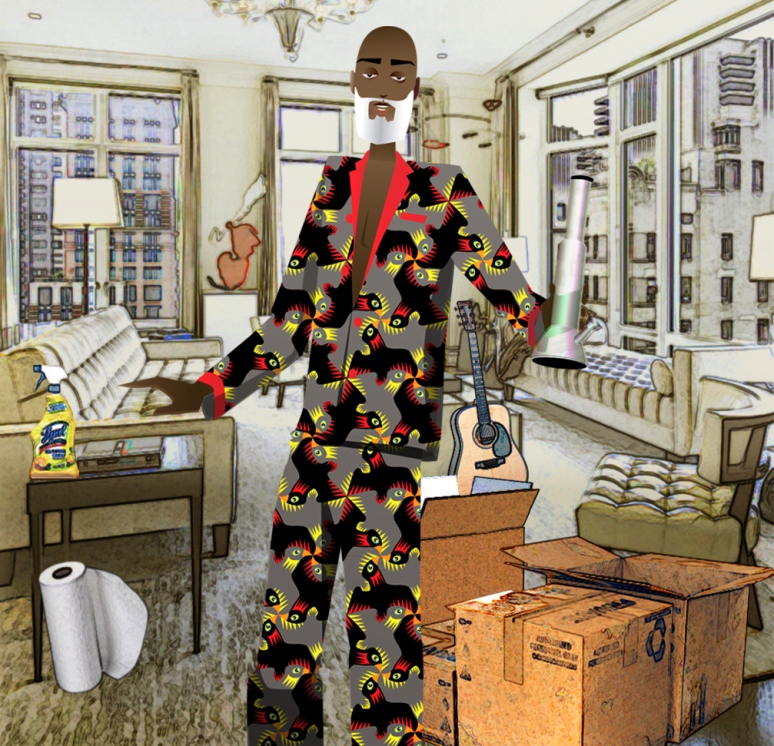 Hef is in the living room, in a fresh pair of pj’s, holding onto an enormous glass bong. I can see from here how lit he is. Wow. He truly enjoys the ganja life. A lot more than I ever realized. Several beat-up cardboard boxes are scattered across the floor and a guitar leans against my coffee table. I’m relieved to see the Lysol spray and a roll of paper towels nearby. But wait. “What is that you’re cooking?” I ask again. He nods towards the kitchen. “Check it out.”

When I lift the lid on the stovetop, it takes me a moment to figure out just what it is I’m looking at. How long has it been? Over thirty years? My grandmother wouldn’t allow them in the house. Not even on holidays. But I turn my back for one afternoon, just one, and this man is in my kitchen cooking pig’s feet! I almost vomit, but it’s rage that’s driving me now. I slam down the lid, grab oven mitts, snatch the pot off the burner and head for the front door.

In the trash room, I fling open the garbage door and pour huge chunks of chopped celery, onion, garlic and five, no, six pig’s feet straight down the chute. It’s gonna stink. All the way down. But I don’t care, as long as this foulness can’t be traced back to me. “I live here, Riccardo. And I don’t want that kind of stench coming out of my crib! If you had just ASKED me, I would’ve told you that and saved you the trouble!” 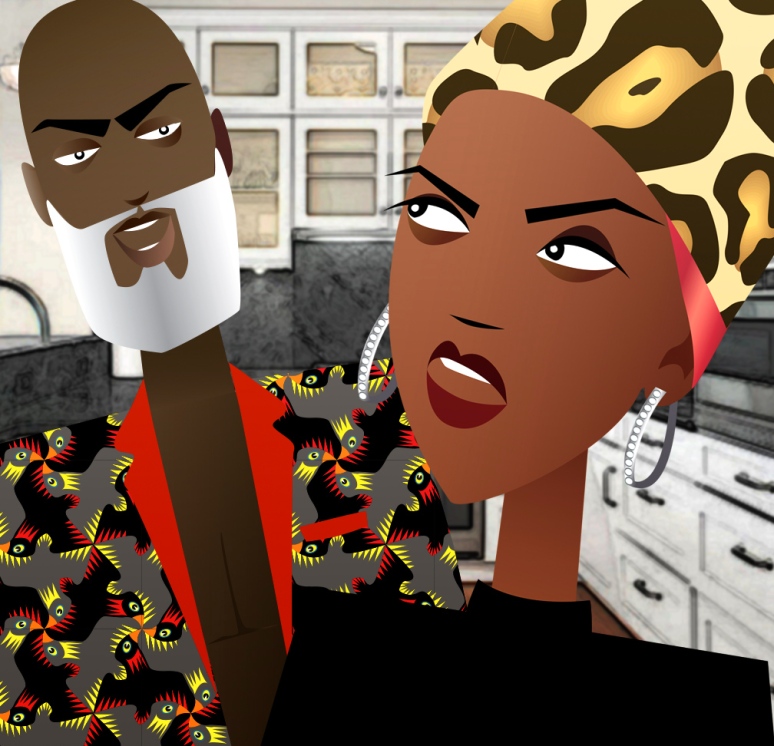 He follows me back inside and shuts the door. “Well excuse me, Miz Central Park West,” he throws it at me like a slur. “I didn’t realize I needed permission from you and the condo board to cook something that, in many places, is considered a delicacy.” His combination of address-shaming and epicurean mansplaining makes me ache to throw this pot at his head. “So you don’t do pig’s feet?” he asks. I count to five to calm myself. “What makes you think I do pig’s feet?” I hiss. “I don’t even do YOUR feet!”

My gut warned me not to do it. I am a woman set in my ways. Having my own space means way too much to me. And it’s get-to-steppin’ for the man who tries to take it from me. Letting him go—again—hurts. It hurts more because this time, I gave so much more. But right now, watching him roll his accumulated crap out of my condo, I ask him with as straight a face as I can muster, “Think you can manage with all of your shit? Maybe you better call Tyrone—”